10 Bestseller Novels Translated from Arabic to English in 2019

It’s a common fact that the Arabic linguistic talents of the young Arab generation isn’t up to par; especially when it comes to reading. It’s alright; I also struggled with the ability to concisely explain myself in the Arabic dialogue and nearly gave up on understanding our genius literary luminaries altogether. Turns out, I would be giving up on impactful novelists like Noble laureate Naguib Mahfouz and regional giant Ehsan Abdelkodous. It's not that I hadn't picked up any Arabic literature in my life - my father is actually a huge fan of the aforementioned heavy weights and has all of their published novels - it's just that I was lost in translation. 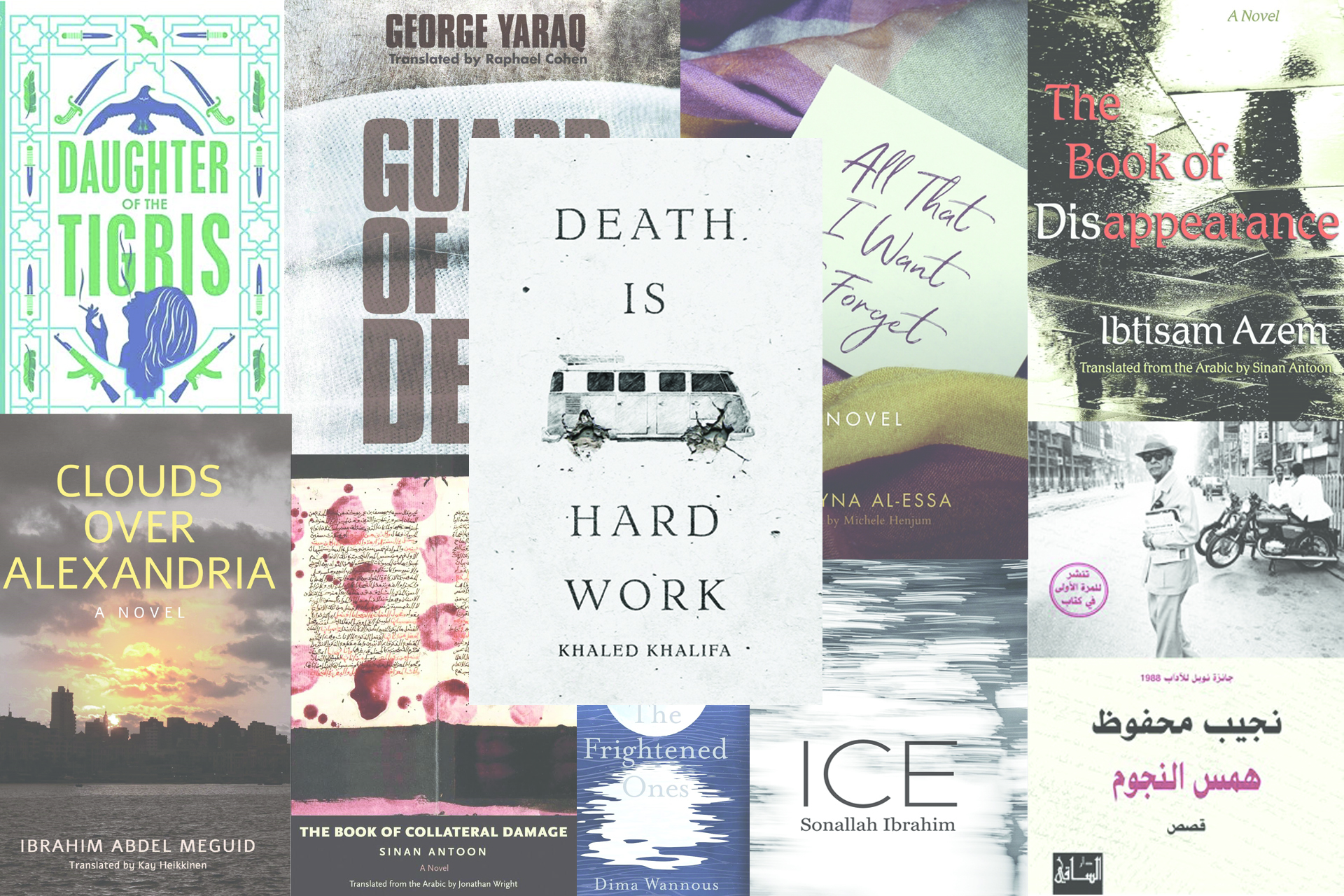 The author, Khaled Khalifa is a Syrian writer and poet who rose to fame with his 2012 novel In Praise of Hatred. He also was a finalist for the International Prize for Arabic Fiction. The translator, Leri Price is a University of Edinburgh graduate with First Class Honours in Arabic. She has already translated two of Khalifa’s novels, and one was shortlisted for US 2017 National Translation Awards (NTA).

Death is Hard Work follows the story of an old man named Abdel Latif from Aleppo, who dies peacefully in a Damascene hospital bed with a final wish to be buried in their family plot in their ancestral village of Anabiya. He passes his will onto his youngest son Bolbol, and the remainder of the family embark on a life-threatening quest filled with interrogation, imprisonment, bombings and other unfortunate events.

The translation of Death is Hard Work was published by Farrar, Straus and Giroux in New York City, USA. Available on Amazon and Macmillan Publisher.

All That I Want to Forget by Buthaina al-Essa 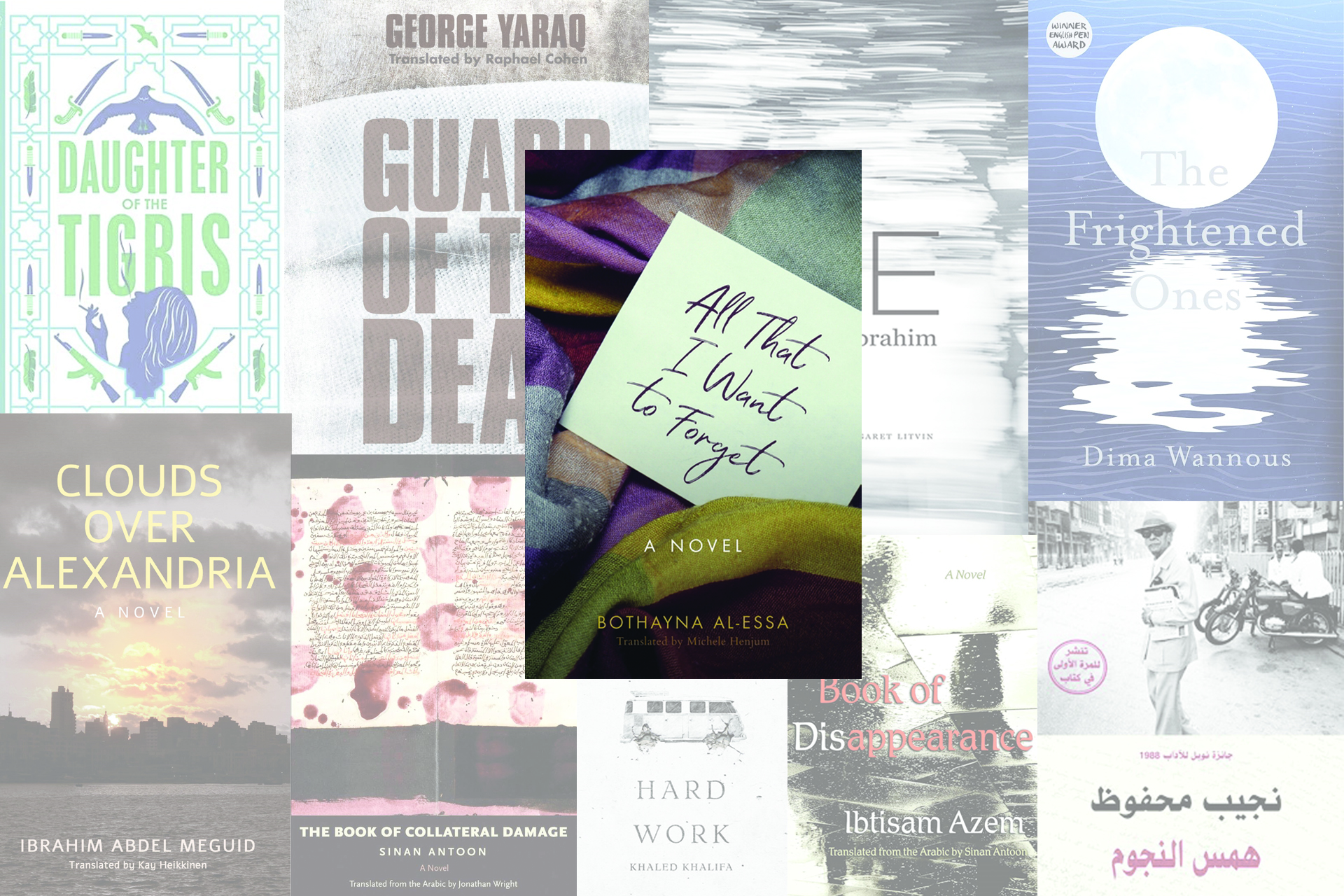 The author, Buthaina al-Essa is an award-winning Kuwaiti novelist who, despite holding a BA degree in finance, has published over a dozen books. She won two State Encouragement Awards and has been longlisted at the Sheikh Zayed Book Awards. The translator, Michele Henjum, holds an MA degree and currently resides in Cairo.

Fatima is enthusiastic about French literature and poetry, which is a dire contrast to what her conservative brother Saqr has in store for her future. Still under his roof, Fatima’s aspirations are deemed too limited by her brother’s constrictions, until she meets a fellow poet like her, Isam, who exchanges love letters with her. Their plans come to an abrupt stop when she is married off to a total stranger named Faris, who isn’t a cruel tyrant like her brother but she still didn’t choose him. Will Fatima find her silver lining?

The translation of All That I Want to Forget was published by Hoopoe in Cairo, Egypt. Available on Amazon and Barnes and Noble.

Guard of the Dead by George Yaraq 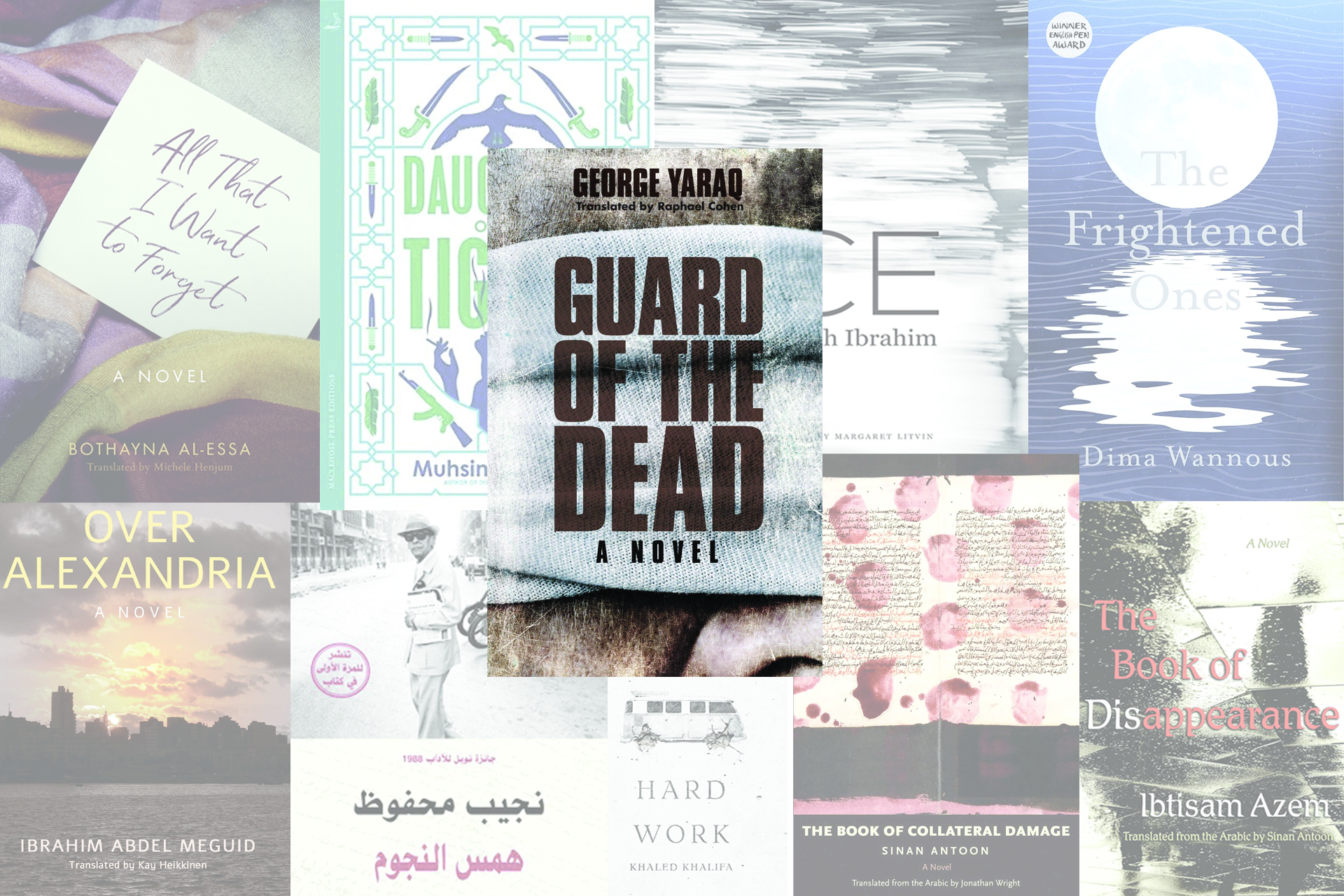 The author, George Yaraq is a journalist from Beirut, Lebanon and was born in 1958. His first published novel was in 2013 and he has worked in the field of editing and writing for numerous Lebanese publications. The translator, Raphael Cohen is a professor and author who was born in Geneva, Switzerland. He has a PhD in economics from Switzerland and currently resides in Cairo, Egypt.

During the civil war in Beirut, Abir escaped from his village to the hustle and bustle of the city and joined a political party in hopes of survival. After he’d been kidnapped from his hospital, he realized that his past in crime was yet to catch up with him.

The translation of Guard of the Dead was published by Hoopoe in Cairo, Egypt. Available on Amazon. 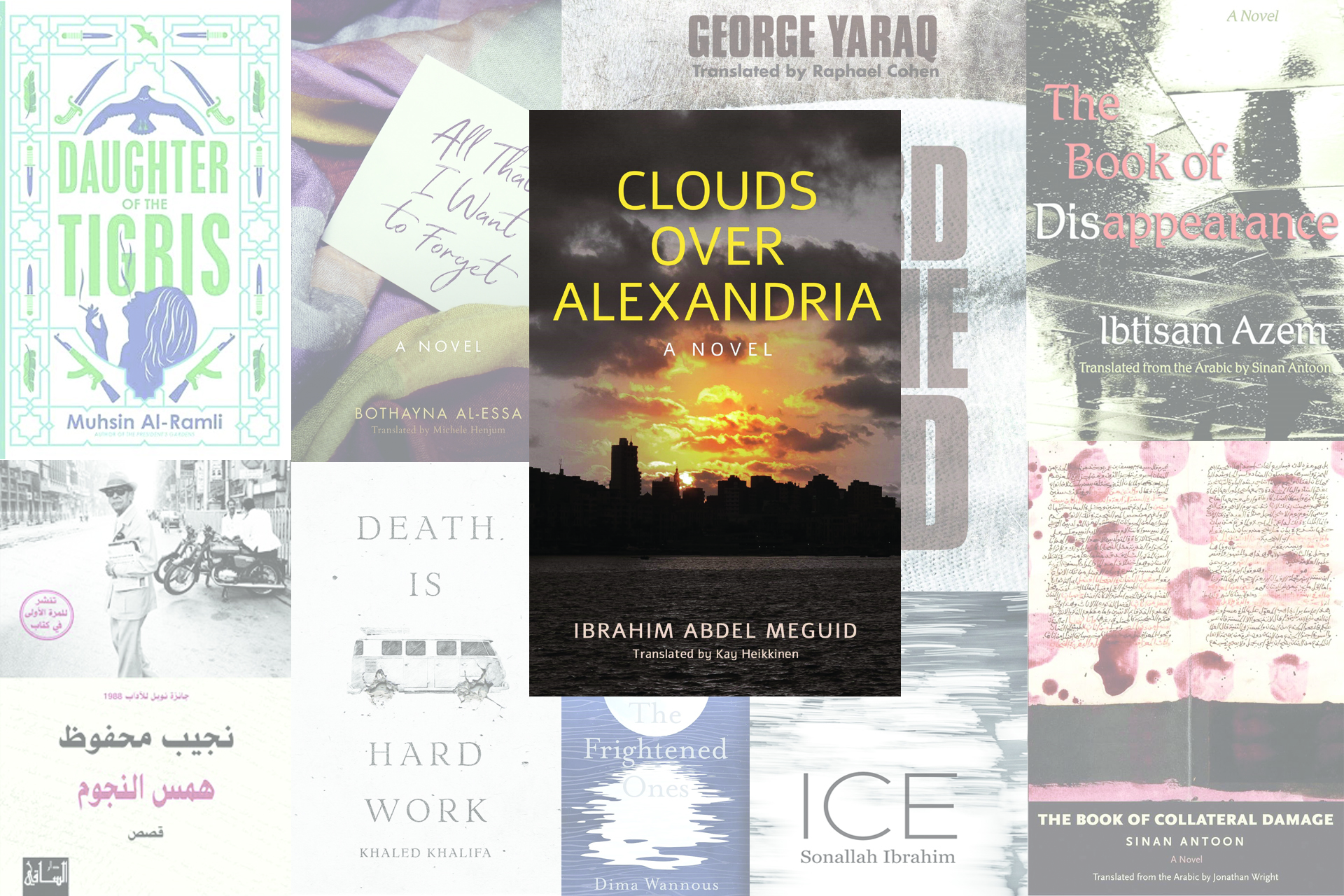 The author, Ibrahim Abdel Meguid is an Egyptian writer from Alexandria, who has an impressive combined experience in writing both novels and short stories. He was awarded the Naguib Mahfouz Medal for Literature in 1997 for The Other Place. The translator, Kay Heikkinen was born in Chicago, USA and earned her PhD in French language and literature in Harvard University. She has published numerous translation for Arabic novels like Naguib Mahfouz’ In the Time of Love.

In Clouds over Alexandria, the triology by Abdel Meguid is complete. The story follows the famous city of Alexandria, which takes place in 1970s during the peak of the city’s cosmopolitan spirit. The city’s interwoven beacon of cultural and ethnic backgrounds paves way for the characters to reveal their true intentions.

The translation of Clouds over Alexandria was published by Hoopoe in Cairo, Egypt. Available on Amazon, Bloomsbury and AUC Press.

The Book of Disappearance by Ibtisam Azem

The author, Ibtisam Azem is a Palestinian short story writer, novelist and journalist based in New York. She has published two novels in Arabic and some of her work has been translated to French, German and English. She is currently working on her third novel and is pursuing an MA degree in Social Work from New York University. The translator, Sinan Antoon is an associate professor at New York University’s Gallatin School from Baghdad, Iraq. He won the National Translation Award in 2012 for translating Mahmoud Darwish’s In the Presence of Absence.

The novel is set in Tel Aviv, Israel 48 hours after the Israelis discover that their Palestinian neighbours have all vanished without a trace. A series of events unfold through alternating narrators including Alaa, a young Palestinian man, and his Jewish neighbour, Ariel. Alaa is haunted by his dead grandmother’s disappearance and his reaction is a catalyst for the storyline.

The translation of The Book of Disappearance was published by Syracuse University Press in New York City, USA. Available on Amazon.

The Book of Collateral Damage by Sinan Antoon 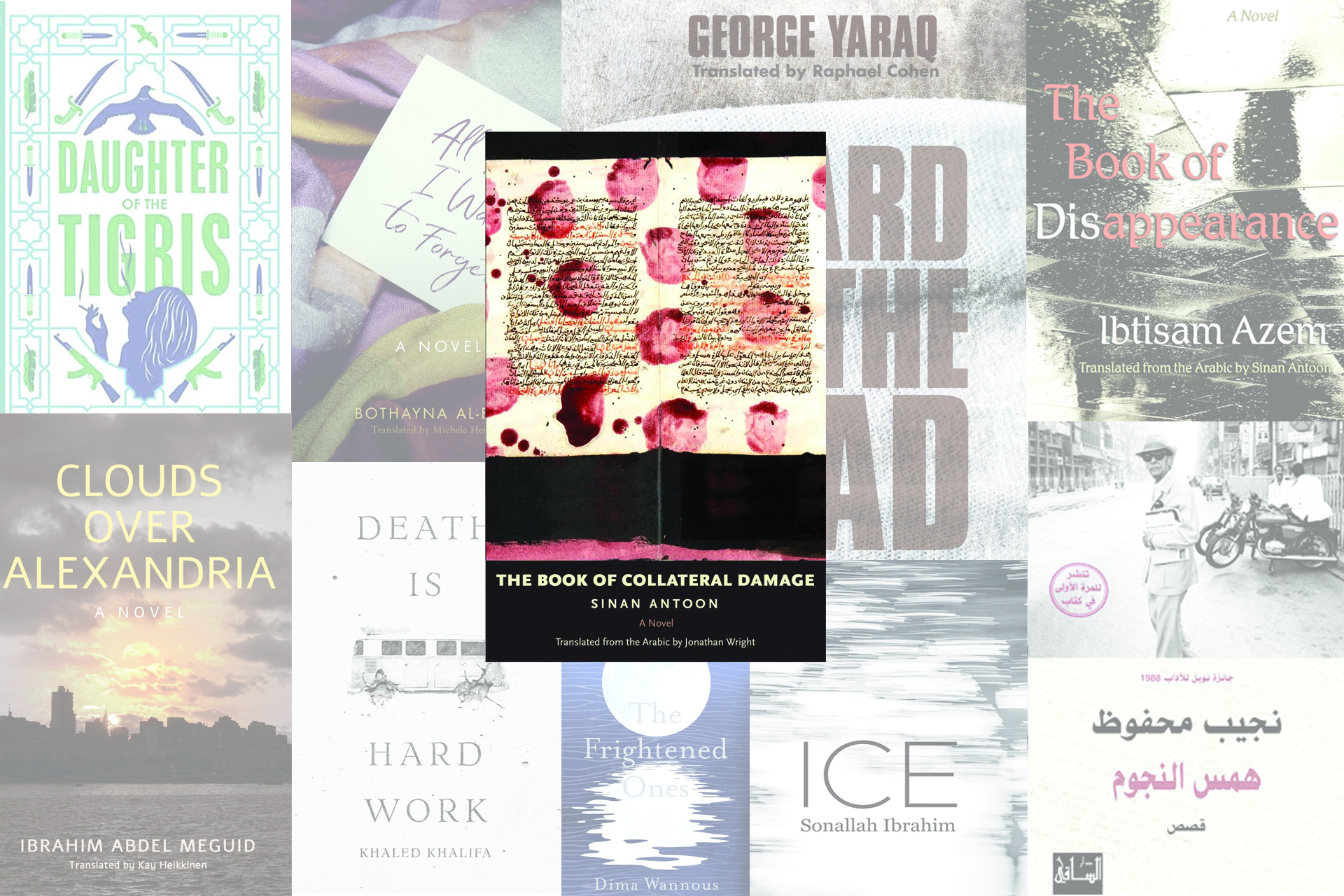 The author, Sinan Antoon was born in Baghdad, Iraq, who left his home after the Gulf War. He currently works as an associate Professor at New York University and has authored award-winning novels that have been translated into thirteen languages. The translator, Jonathan Wright is an award-winning journalist, who was born in the Hampshire, the United Kingdom and also served as Reuters’ Cairo bureau chief.

In Antoon’s Book of Collateral Damage, Nameer is a young Iraqi scholar studying at Harvard, who is hired by directors to help document the 2003 invasion of Iraq. On his journey towards self-discovery, Nameer finds his life in New York City intertwined with fragments from his home’s past and present. 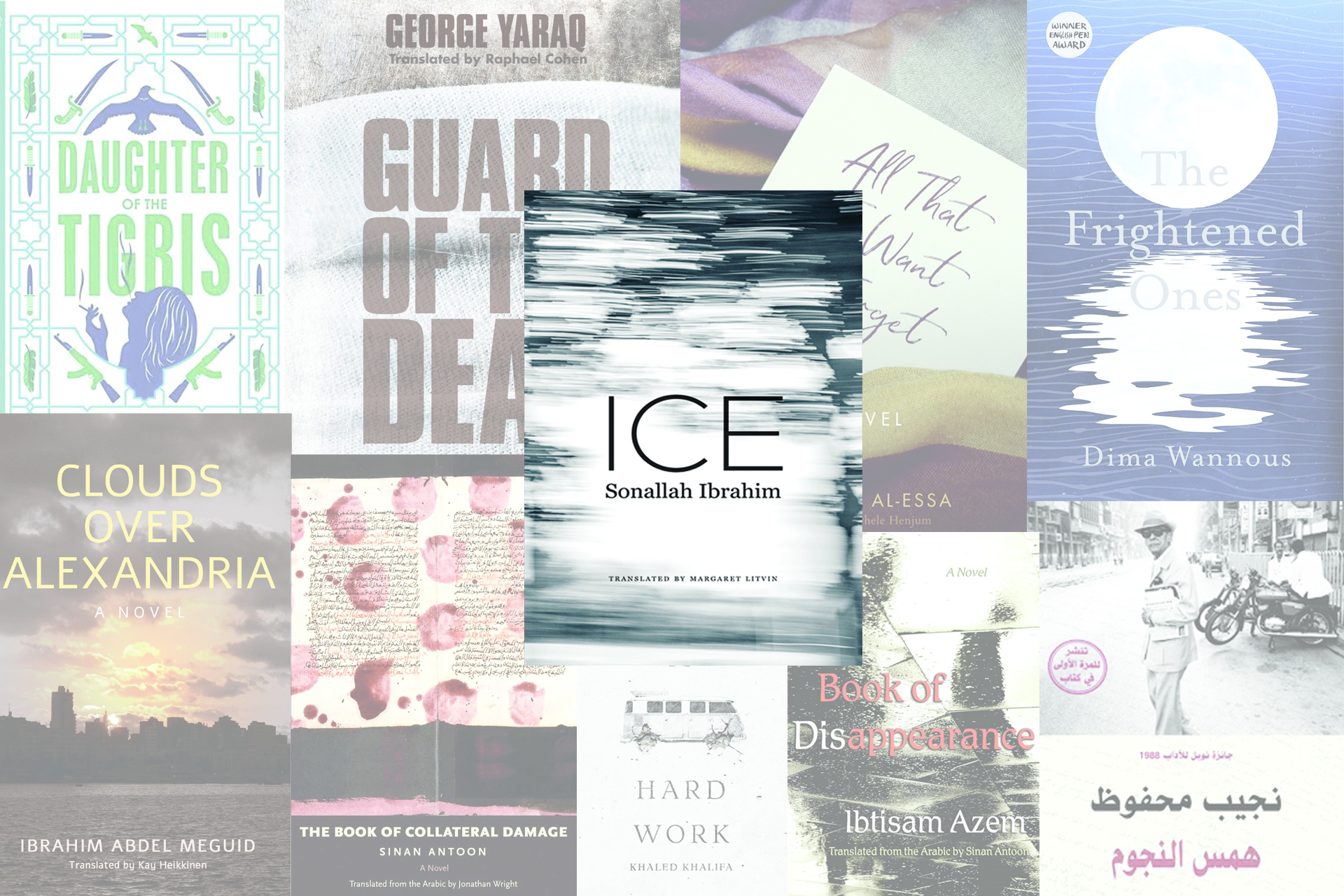 The author, Sonallah Ibrahim was born in Cairo, Egypt to an upper-middle class family. Following his release from a seven-year imprisonment in military confinement in 1964, he visited the opening of the Aswan Dam where he became inspired to pursue writing. The translator, Margaret Litvin is currently an associate professor at Boston University and her research is focused on reconstructing literary legacies of Arab writers.

The novel is set in 1973 when an Egyptian historian named Dr. Shukri is in the pursuit of a graduate degree in Moscow, Russia. The tale is told through his quirky encounters with life in Russia with a group of natives that he meets on his trek.

The translation for Ice was published by Seagull Books in Chicago, USA. Available on Thrift Books.

The Frightened Ones by Dima Wannous

The author, Dima Wannous is a Syrian writer and was born in 1982. She studied French literature at the Sorbonne and authored a collection of short stories. She was named one of Beirut 39, which honours Arab writers under the age of 40 that are chosen by the Hay Festival in Wales. The translator, Elisabeth Jaquette graduated from Columbia University and has received several English PEN Translates Awards as well as being shortlisted for the TA First Translation Prize.

The novel follows Suleima and Nassim, who meet Damascus at their therapist’s reception. The couple later flee Syria to Germany, after Nassim gives Suleima a manuscript whose narrator bears awfully similar characteristics to our protagonists. The story goes through feelings of oppression and loss of self-identity as Suleima uncovers her mysterious past linked due to Nassim’s revelation token.

The translation for The Frightened Ones was published by Harvill Secker in London, United Kingdom. Available on Amazon

Daughter of the Tigris by Muhsin al-Ramli 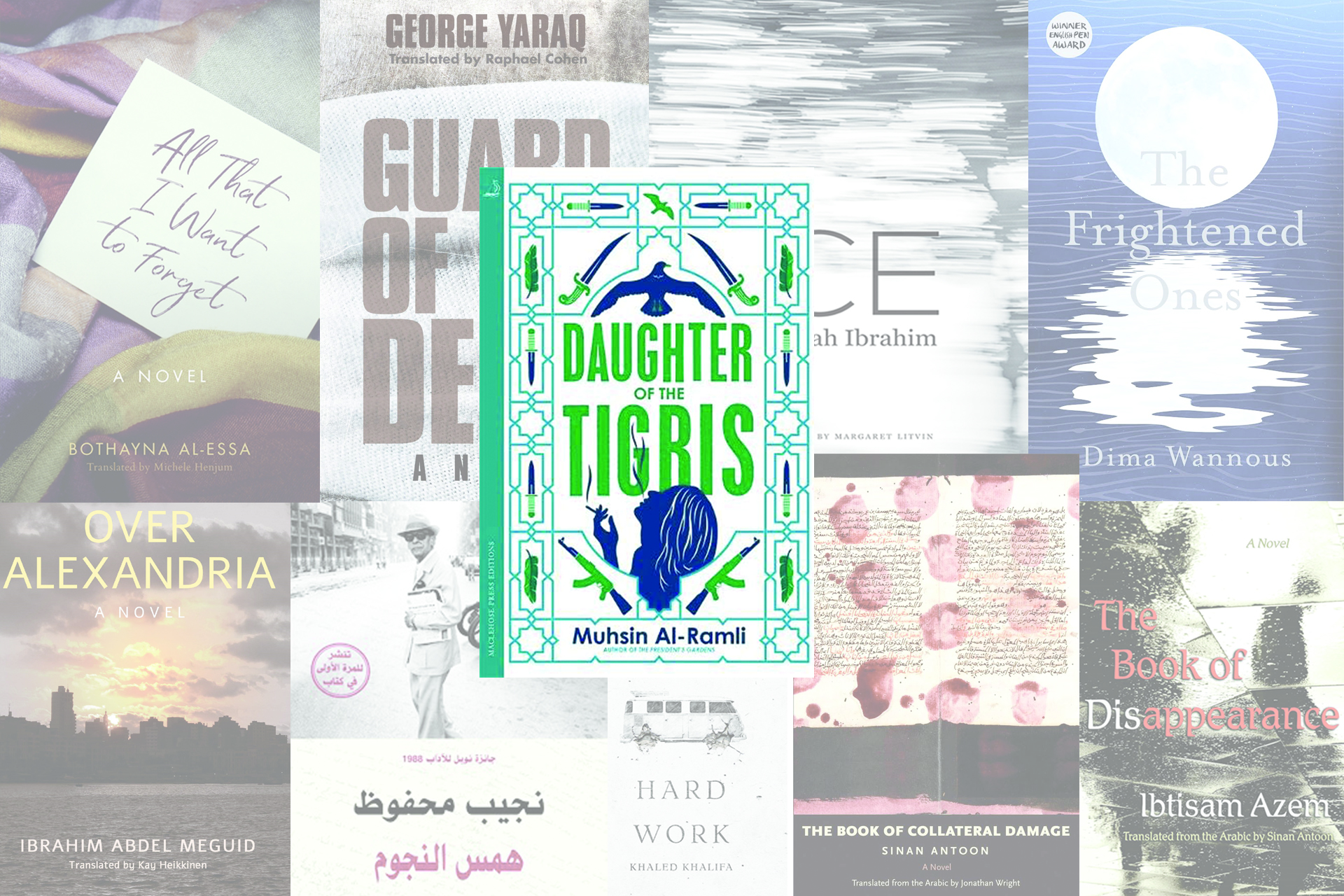 The author, Muhsin Al-Ramli is an Iraqi writer and poet who was born in Sudara, Iraq. He was on the longlist for the IPAF in 2013. The translator, Luke Leafgren was born in Alaska, Canada and received his BA in English from Columbia University and his PhD in comparative literature from Harvard University.

Qisma leaves on the sixth day of Ramadan for Baghdad with her husband-to-be during the bloodiest year of the war. After her escape and the consummation of her marriage to Tariq, she feels afraid for her son from those who murdered her father.

The translation of Daughter of the Tigris was published by MacLehose Press in London, United Kingdom. Available on Amazon.

Whisper of Stars by Naguib Mahfouz 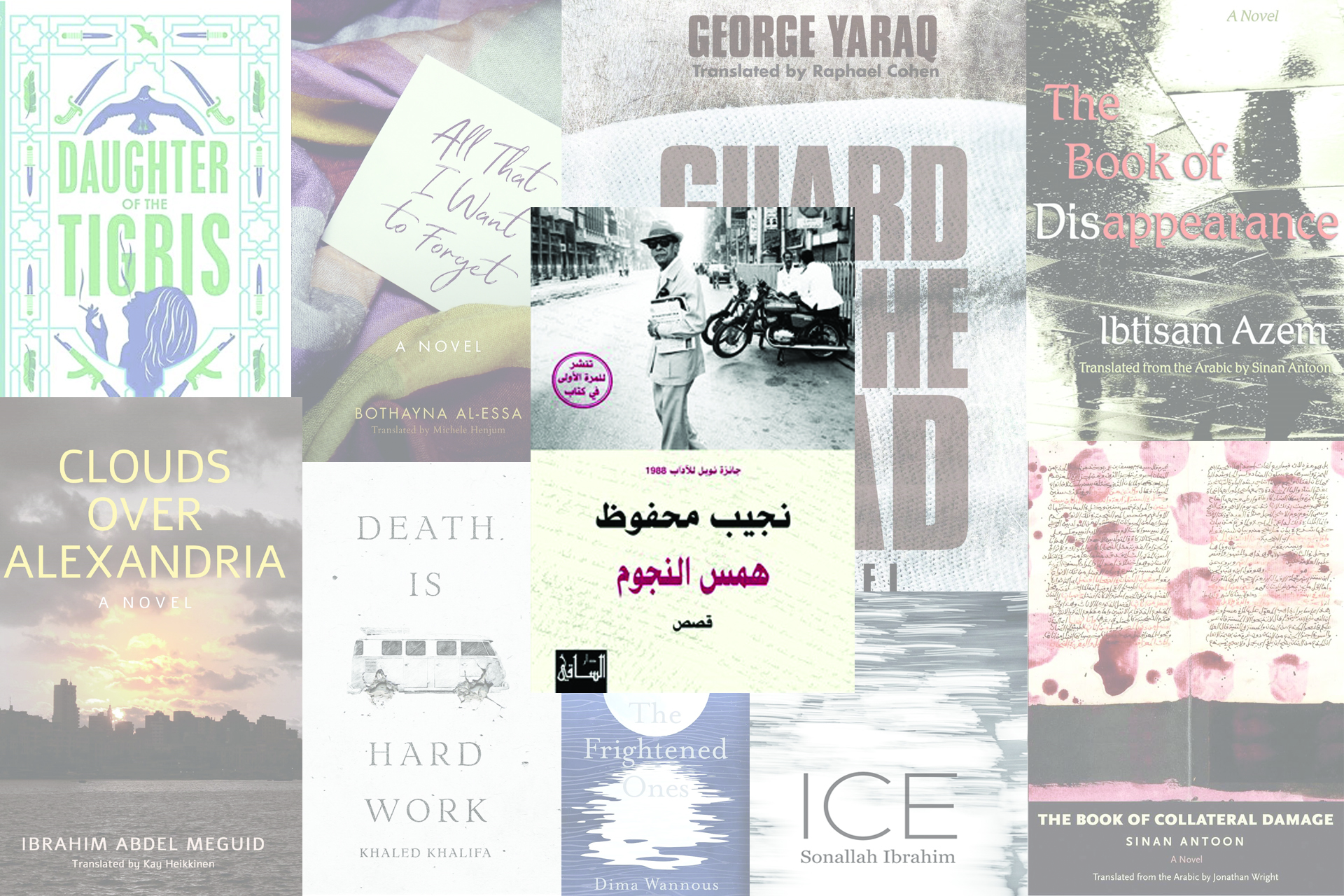 The author, Naguib Mahfouz was an Egyptian writer and the only Arab to win the Nobel Prize for Literature. His work is considered one the most influential on Arab history of all time as he is the first contemporary writers of Arabic literature and authored over 45 books. The translator, Roger Allen was an English scholar who served 44 years as a Professor of Arabic and Comparative Literature at the University of Pennsylvania. He translated over six of Mahfouz’ most notable novels.

This collection consists of 18 short stories that take place in a popular neighbourhood in Cairo. Each character appears in the most convenient of situations to render the story its eloquent coherence. Although these stories have been written over two decades ago, they still manage to depict the dreadful and ironic reality that is present today in Egypt.

The translation for Whisper of Stars was published by Dar El Saqi in Beirut, Lebanon. Available on Raya Agency.

From Landscape to Doorknob, Karim Nader Blurs the Line Between Architectural Design and Art